Let’s look a bit at one of Mikrotik routers most powerful capability: scripting. Using scripts we can automate updating and backups, so we can sleep a bit easier. We also can send the backups directly via email, so I will assume that you have a (spare) email address from where to send notifications. 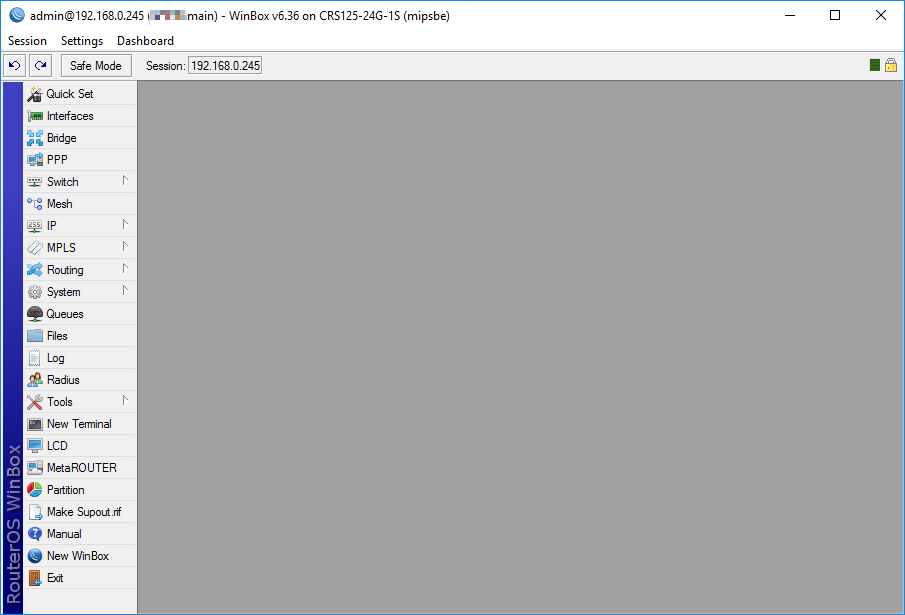 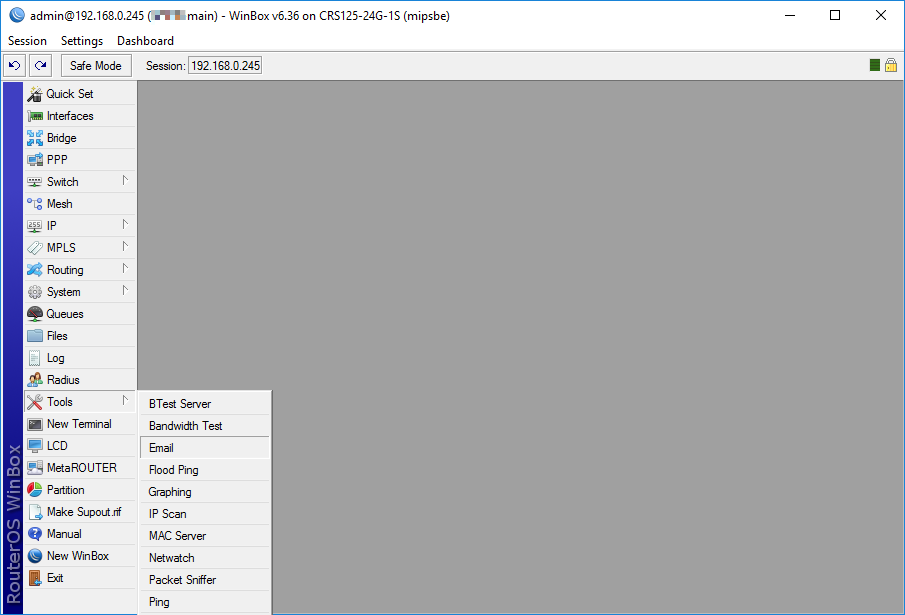 The Email Settings panel should appear: 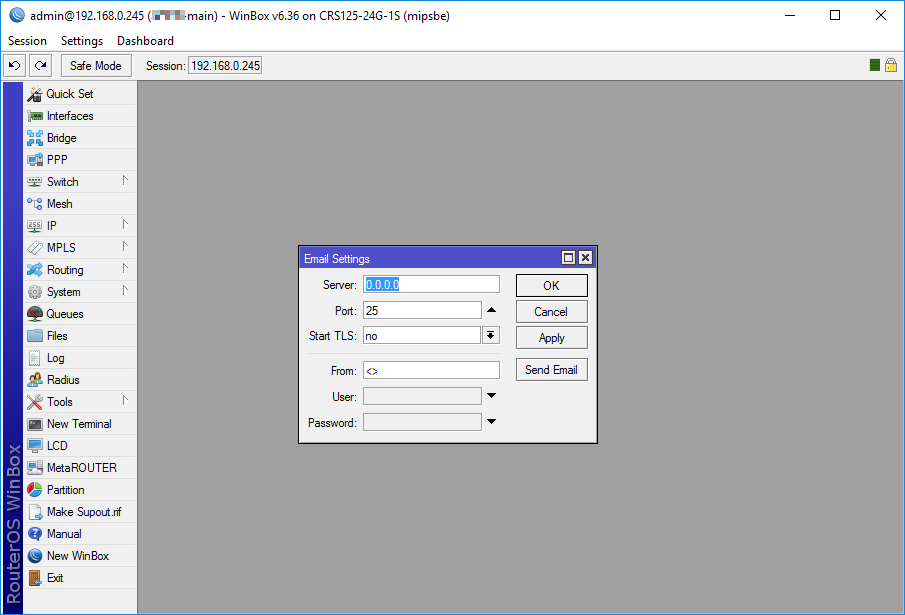 Enter your email servers Address and Port. Set the appropriate encryption, make sure to use the same From and User names and enter the password as well: 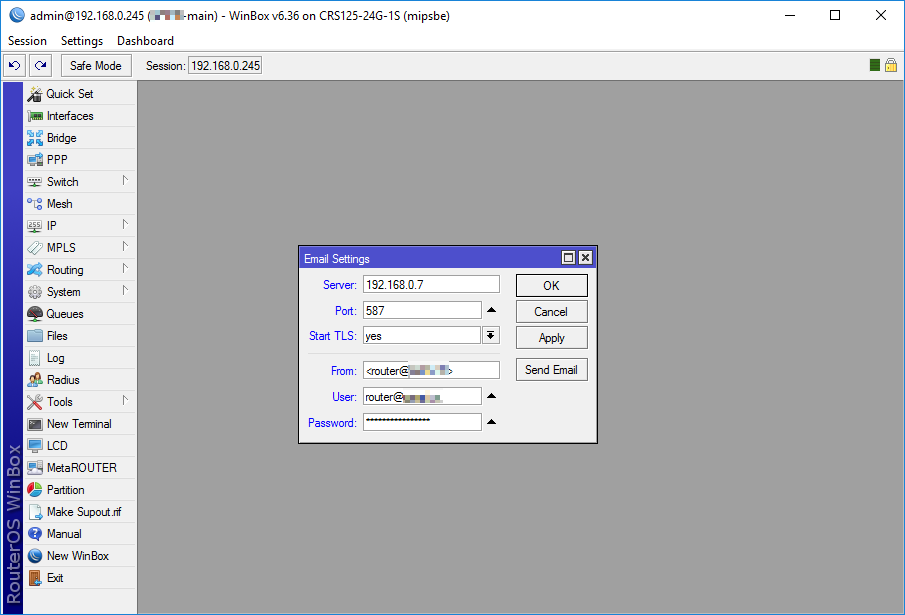 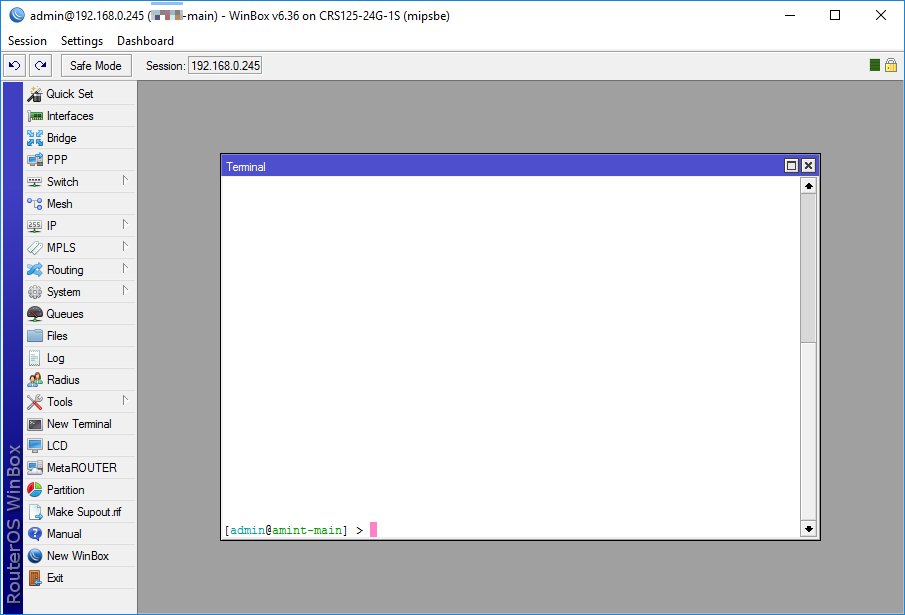 Type the following command to test if everything is setup properly and hit enter: 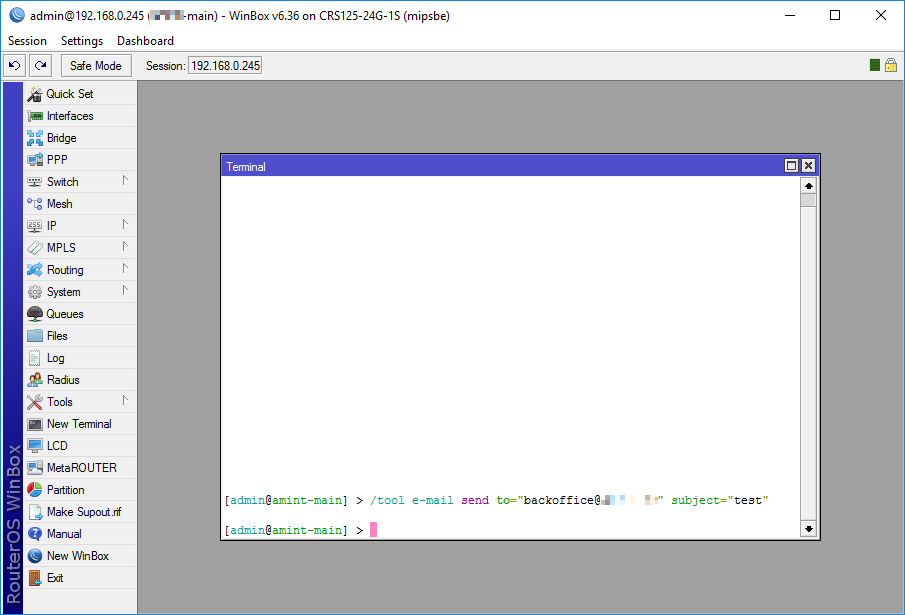 If you received the test e-mail, than we can move to the next step. Go to System -> Scripts: 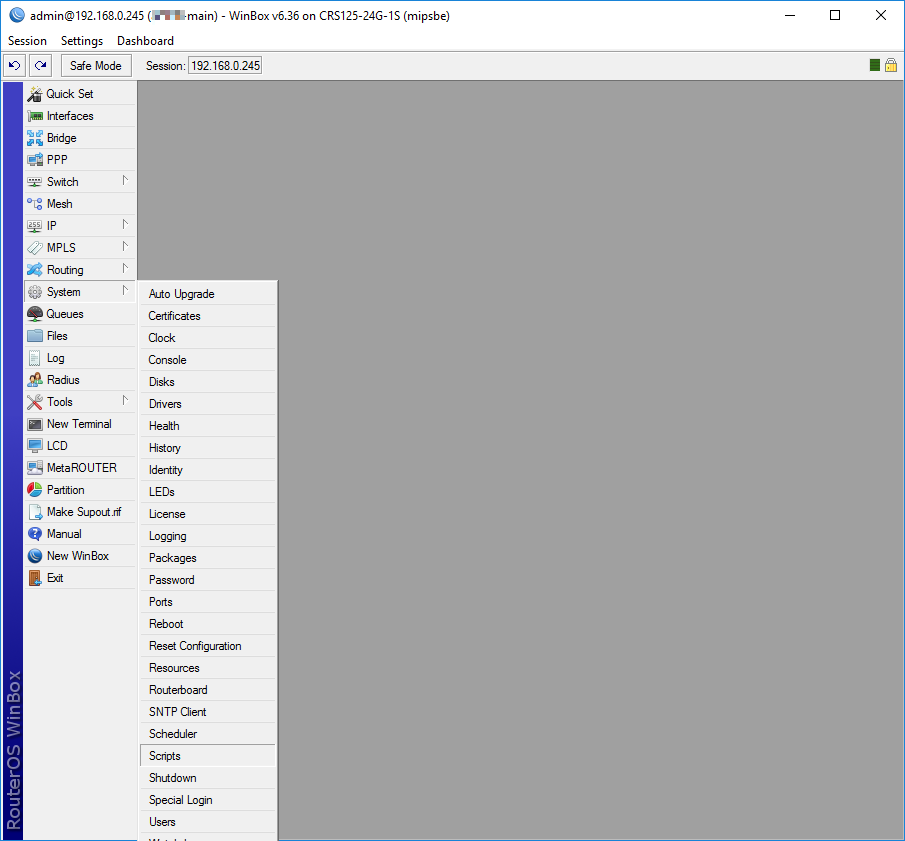 The Script List panel will appear. Click on the blue plus icon to add a new script: 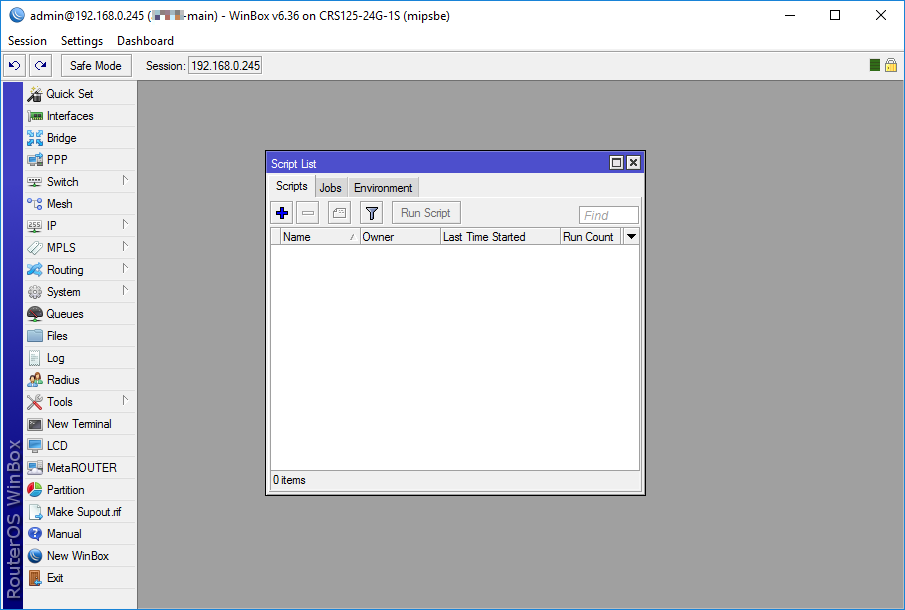 The New Script panel should appear: 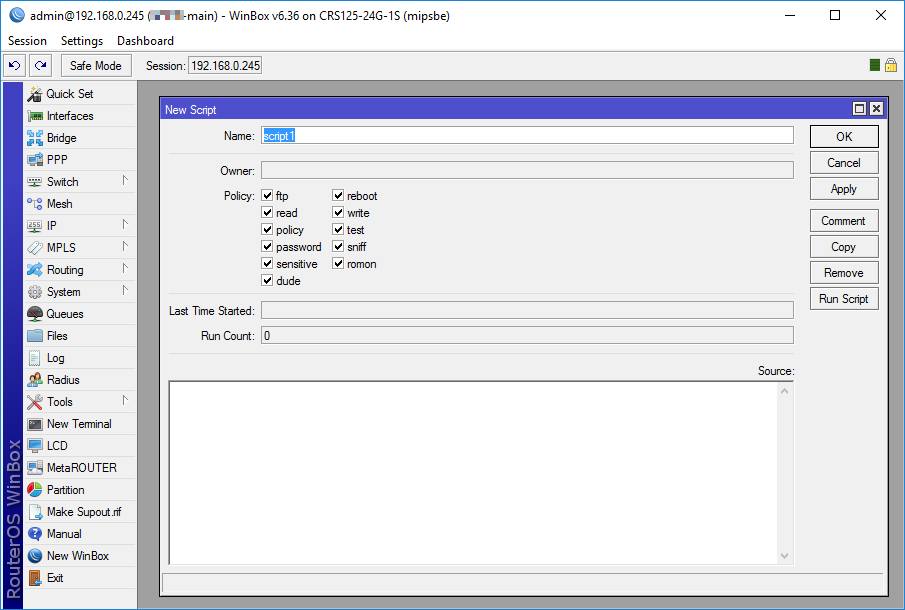 Input backup for Name and paste the following into the Source text-box, leave everything else as is adn hit OK: 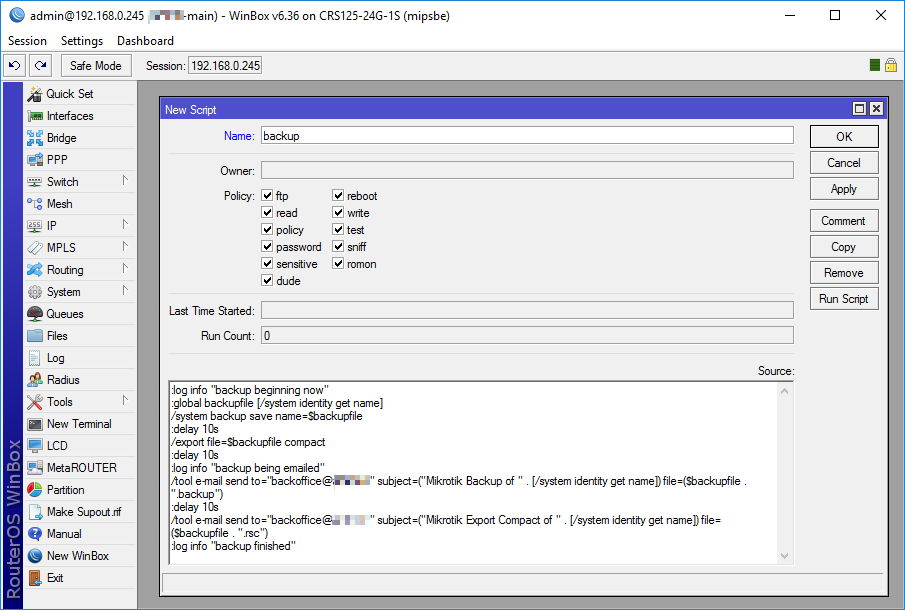 You now should have a script named backup, just like in the following screenshot: 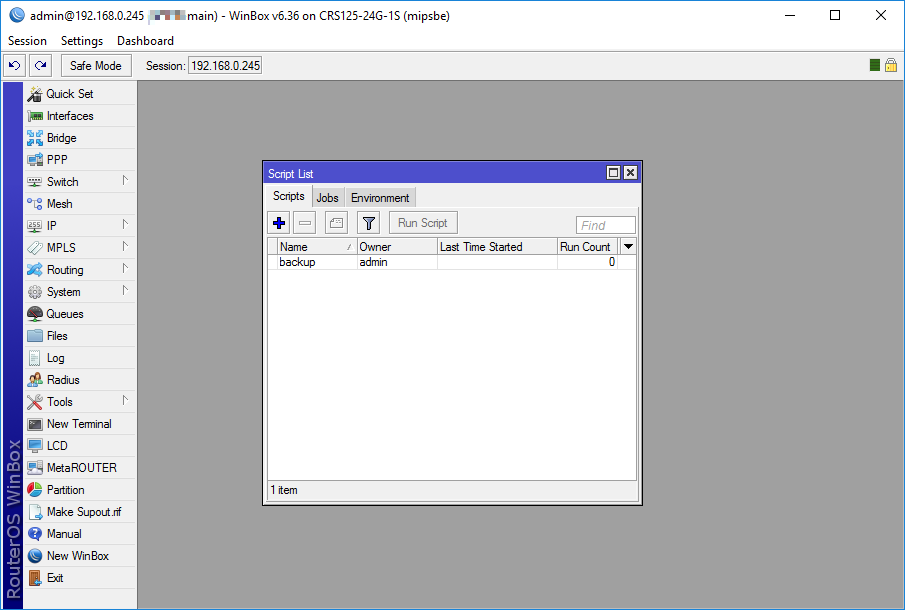 Now let’s see if it works. Open another terminal (by clicking New Terminal): 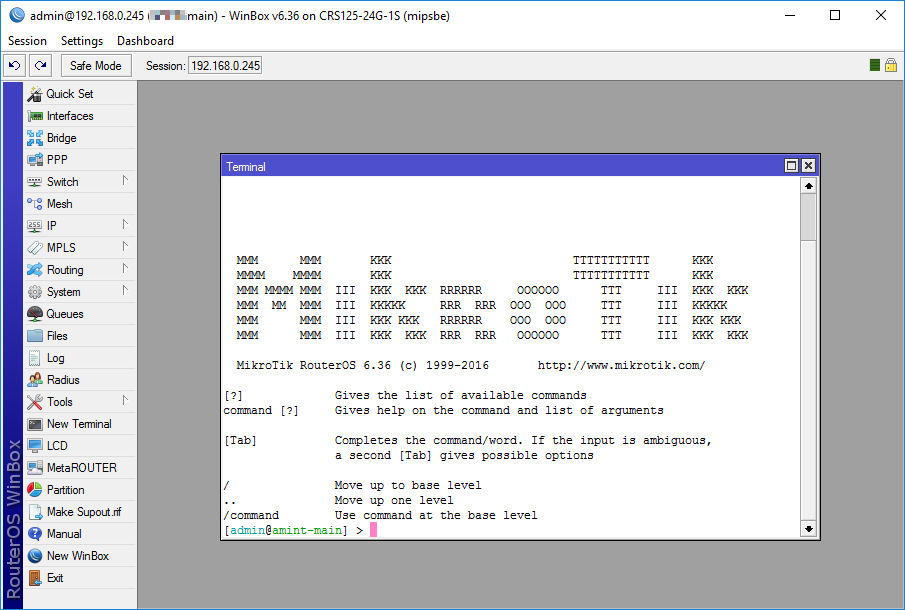 Run the following to test the script: 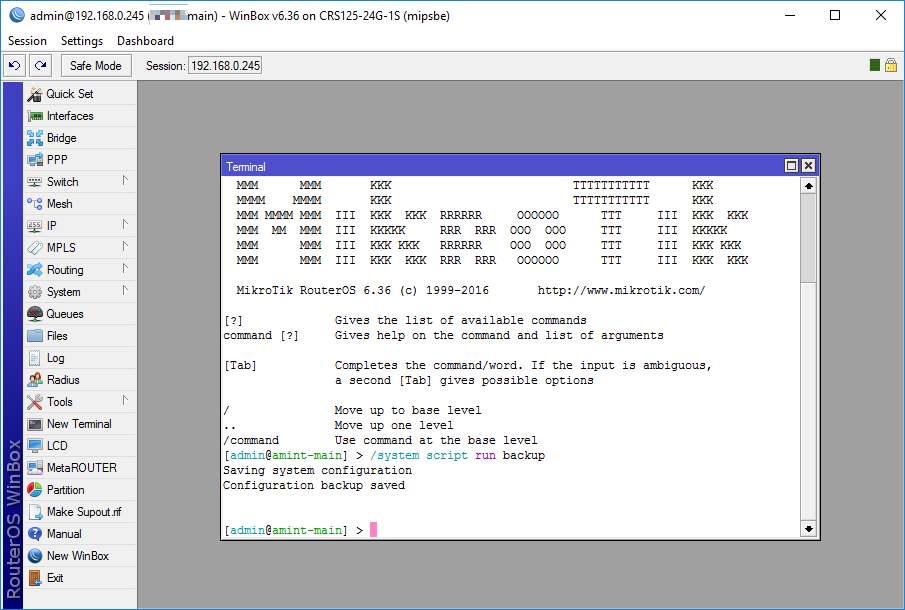 You should receive two emails. One containing a binary backup and the other containing the compact configuration file of the router.

NOTE: As of writing this article RouterOS doesn’t allow to attach two or more files to a single email.

If everything wen’t fine let’s move on; close the terminal window and go back to the Script List panel. Create another script (with the blue plus button): 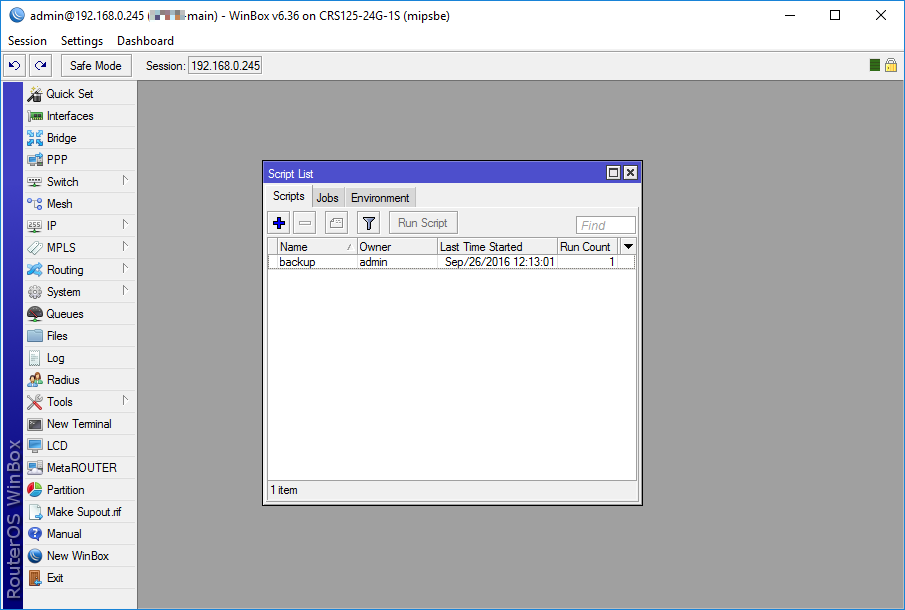 We gonna Name this one update, leave everything as is and enter the following in the Source text-box: 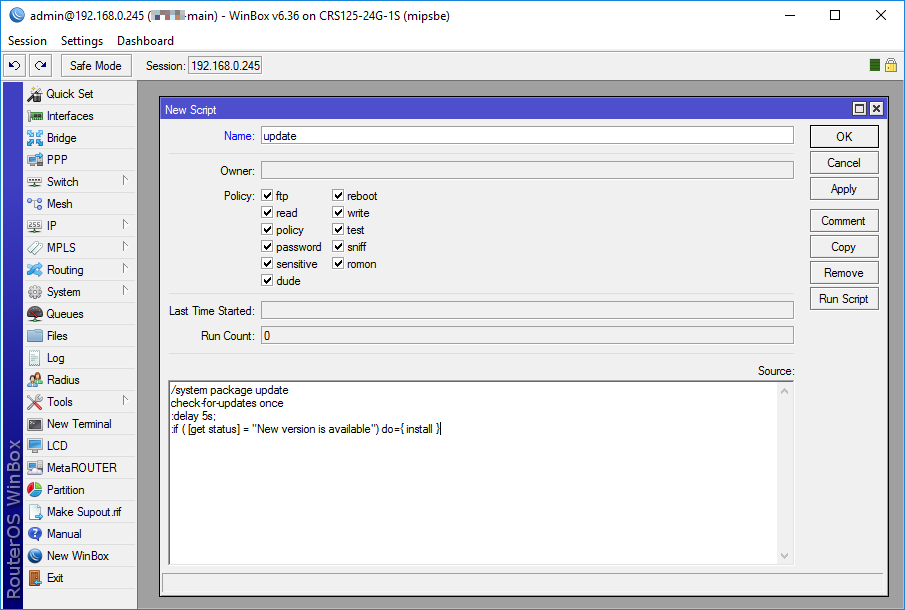 After pressing OK we now should have two scripts: 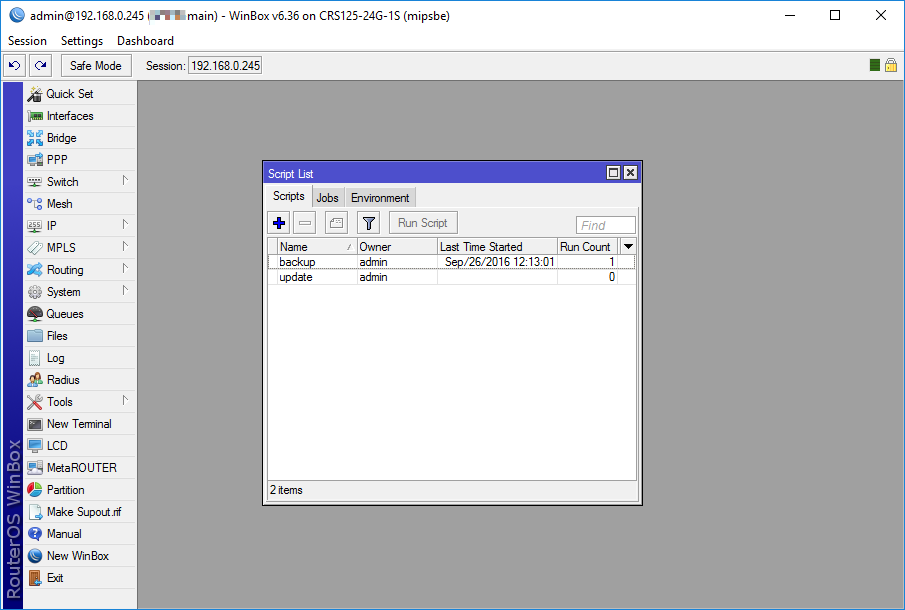 Let us test the second one as well, by running:

NOTE: If there is an update pending the router will reboot after applying it, that could lead to a few minutes of downtime! 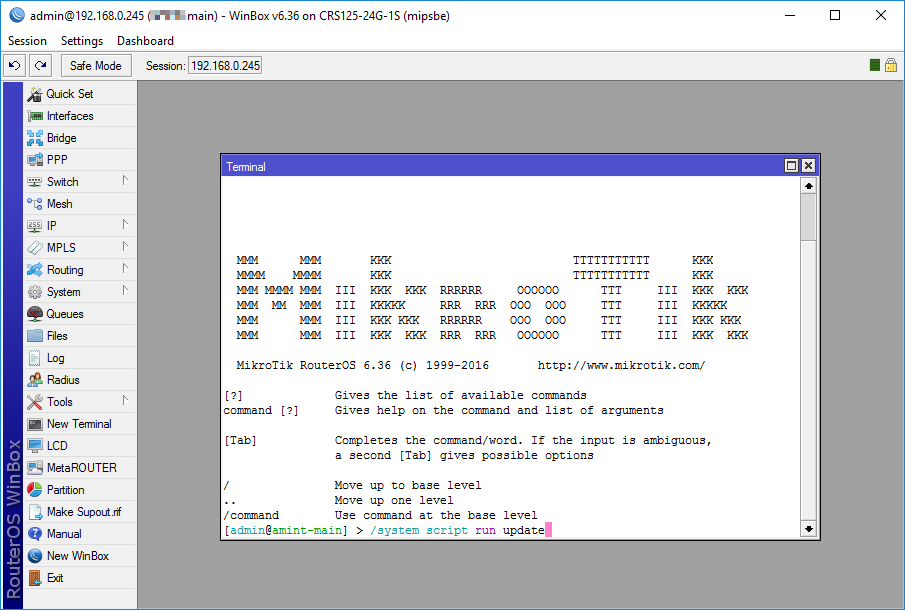 Here’s a screenshot with the update in progress: 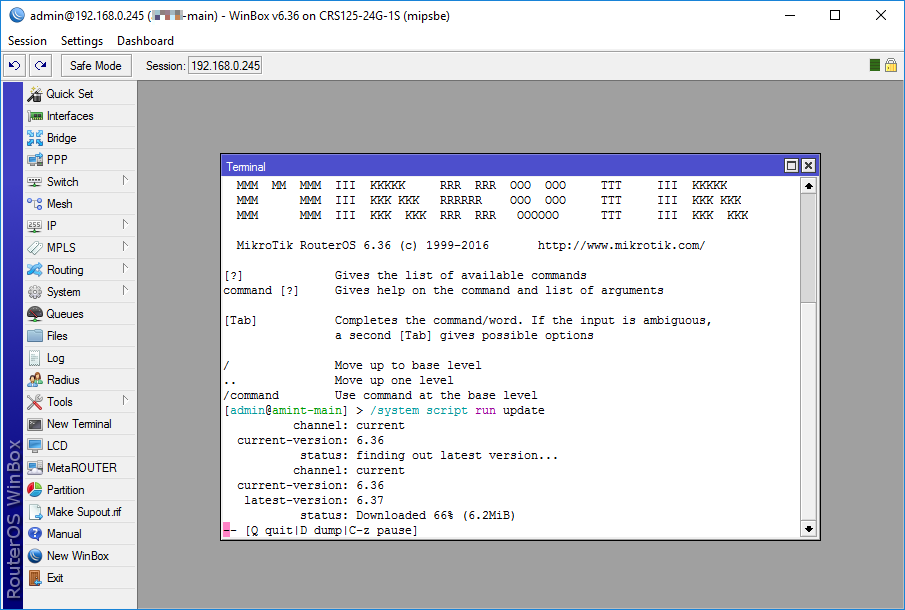 Now we need to schedule our two scripts. To do that go to System -> Scheduler: 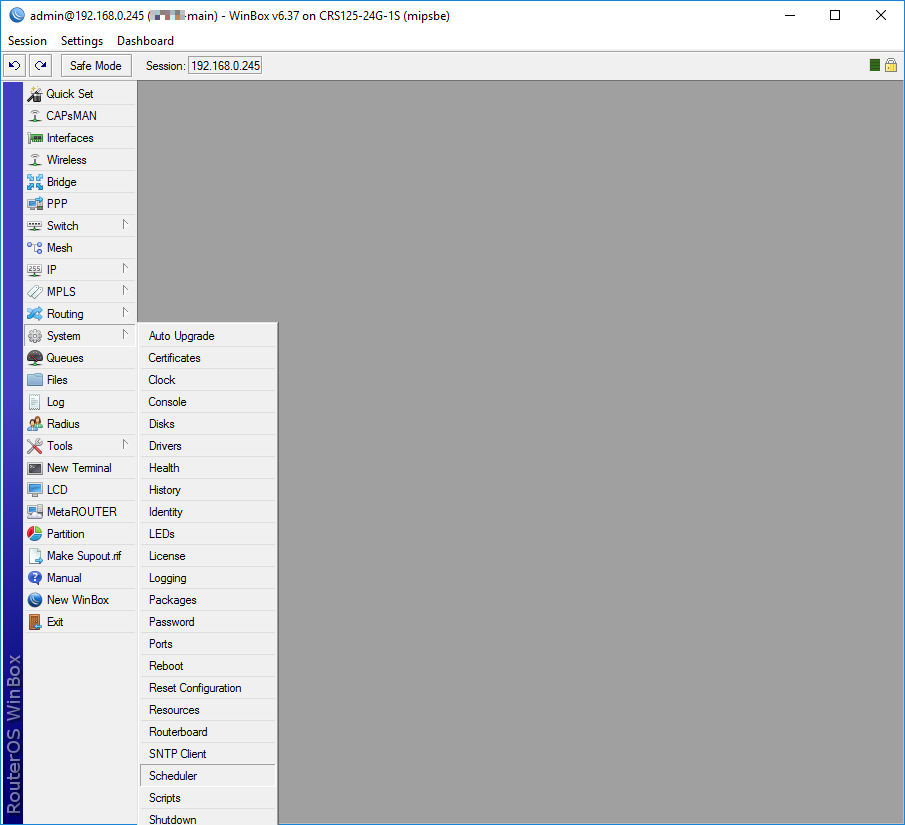 The Scheduler panel will appear, click on the blue plus to add a new schedule: 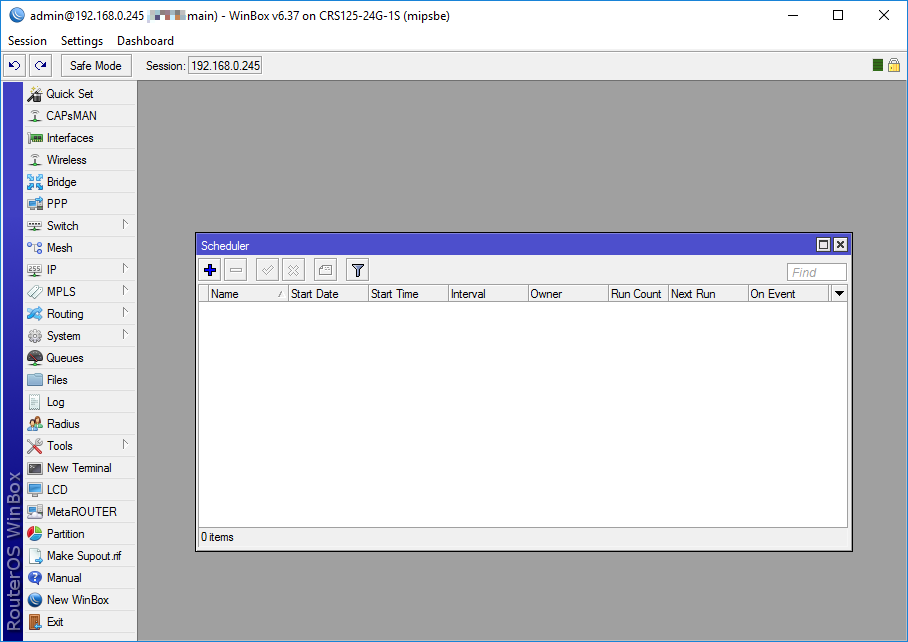 The New Schedule panel pops up: 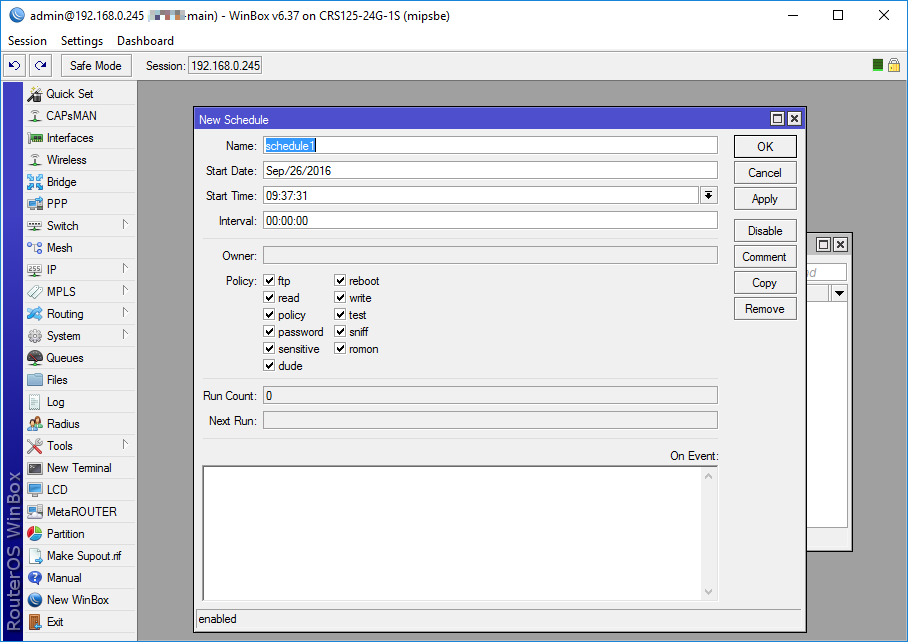 Enter maintenance as Name, set the Start Date and the Start Time to a day / time you want to run the scripts, in my case it is every Sunday at 5 AM. Set the Interval to 7 days to run it weekly, leave everything else as is and paste the following into the On Event text-box: 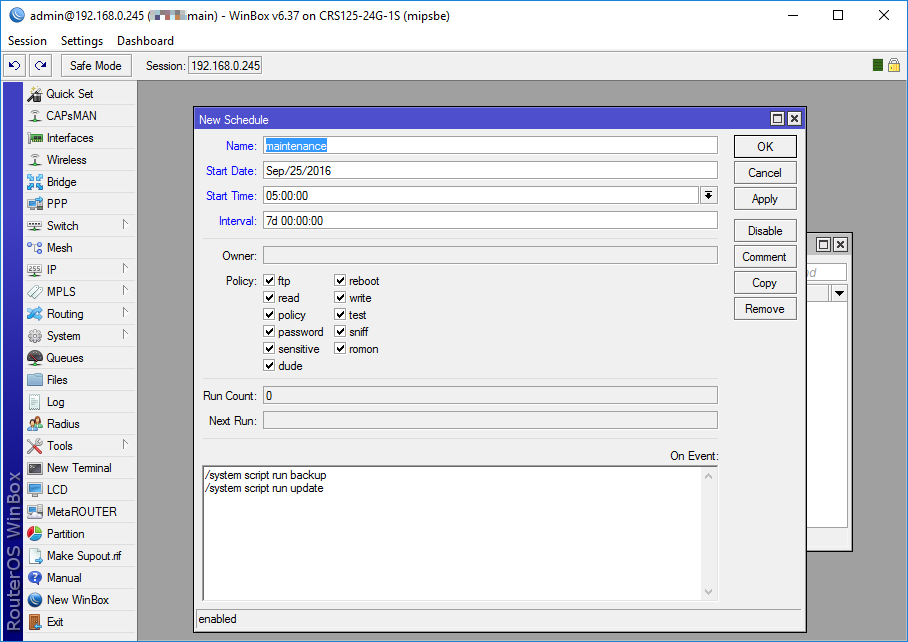 After hitting OK you should see your schedule: 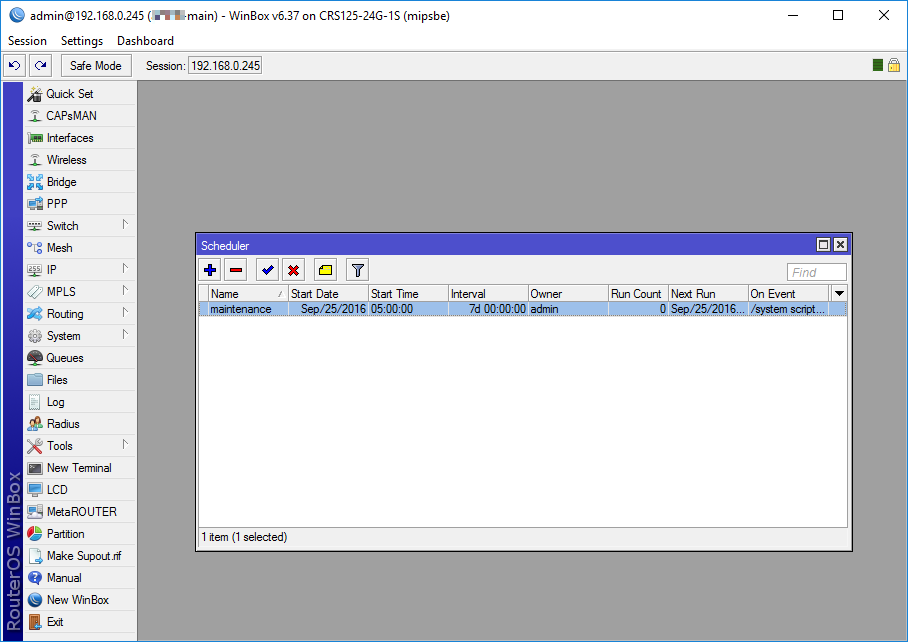 Schedule depends on proper timekeeping so let’s make sure that the routers clock is accurate. To do that, let’s go to System -> Clock: and set the date, clock and timezone manually first: 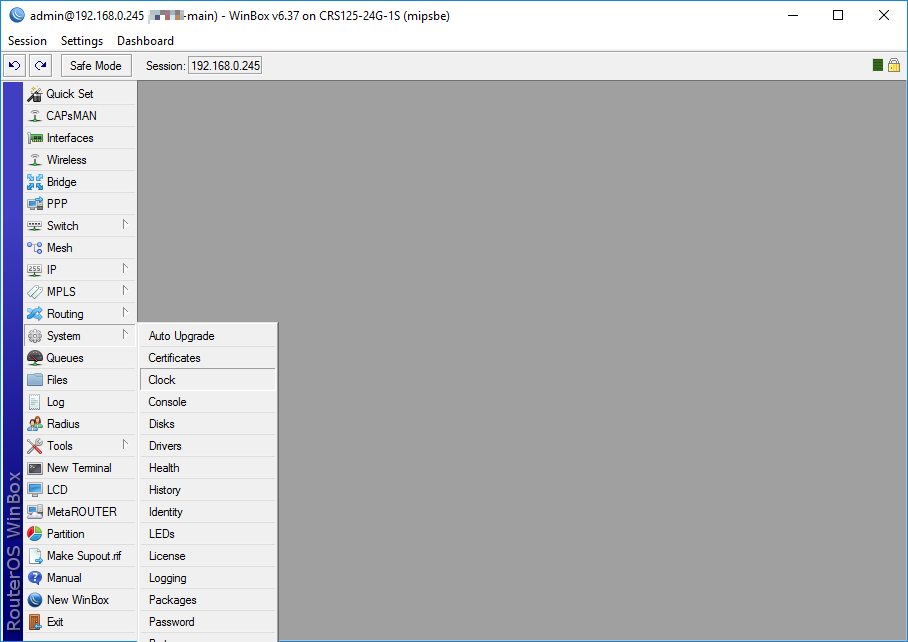 After that, we can set up syncing. Go to System -> SNTP Client: 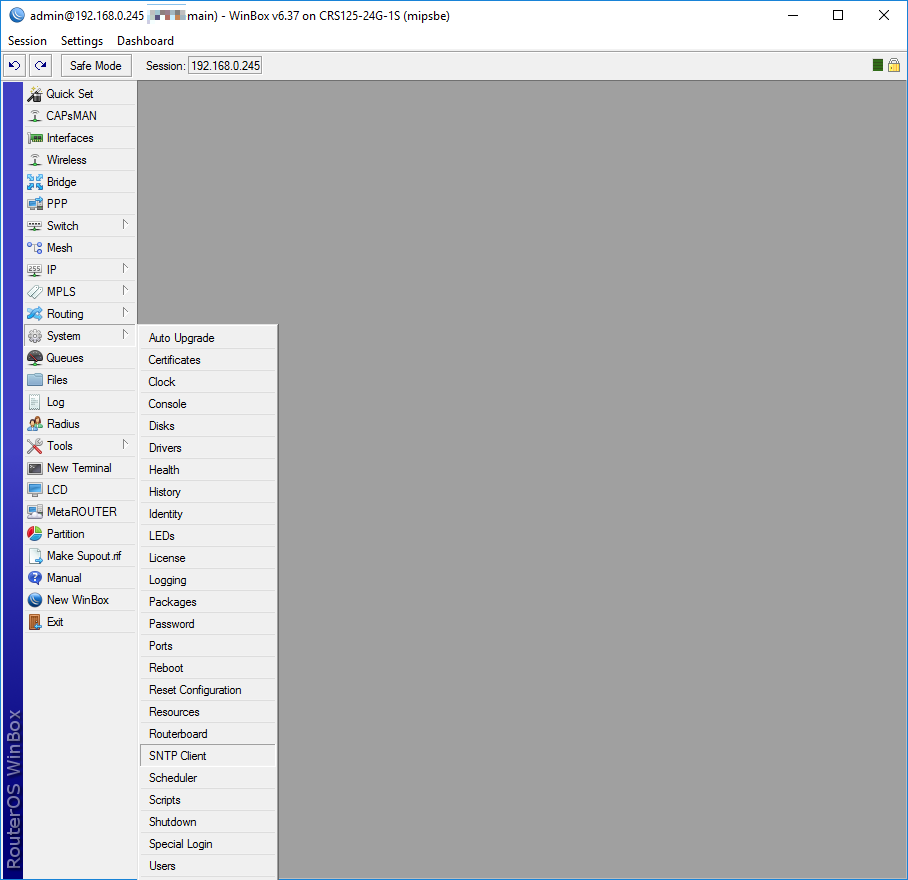 The SNTP Client panel will appear: 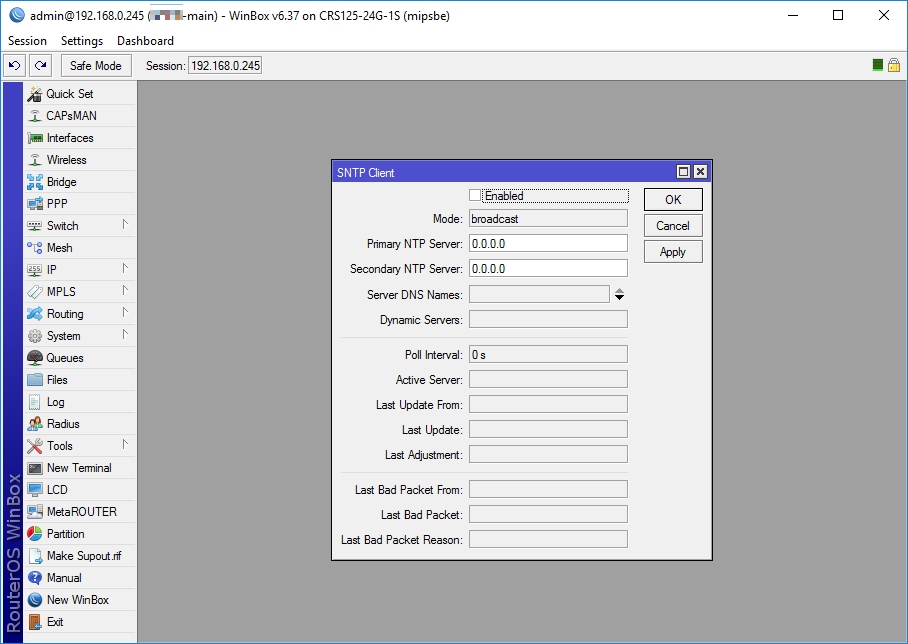 Check Enabled and enter two NTP Servers. If you prefer to use public NTP servers by host-name (here’s a helpful list), than be sure to enter at-least two public DNS servers as well. In my case I will use the local ADDS servers: 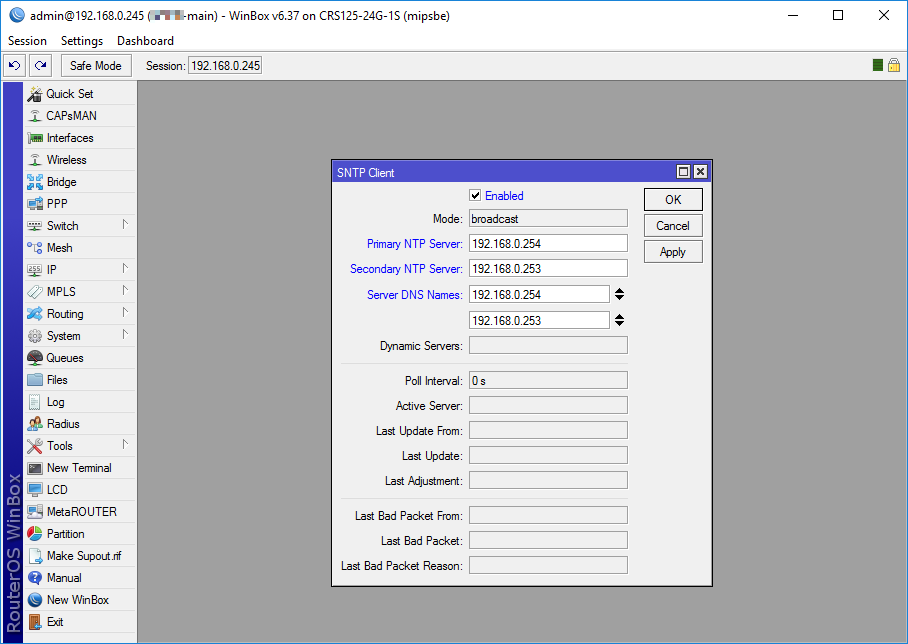 After hitting Apply (or OK and reopening the panel) we can see that it updated correctly: 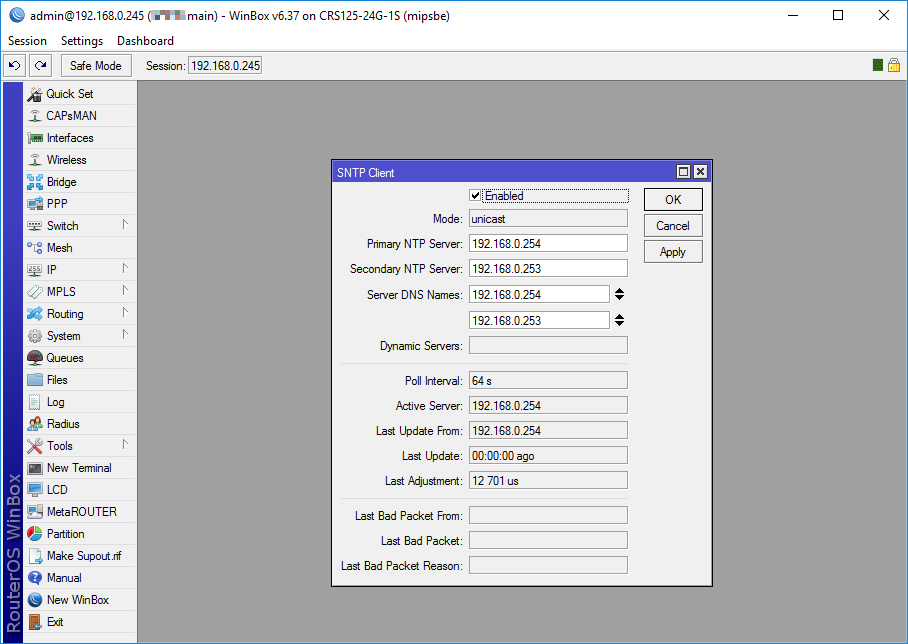 Finally let’s give our router a proper name, since we use that in our backup scripts. Go to System -> Identity: 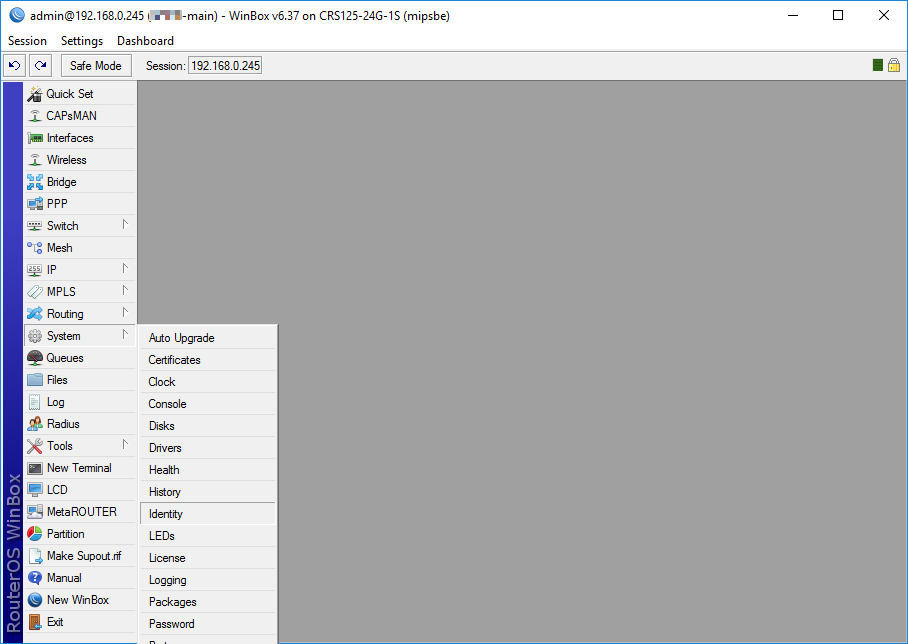 Enter a name into the Identity field and hit OK to save it: 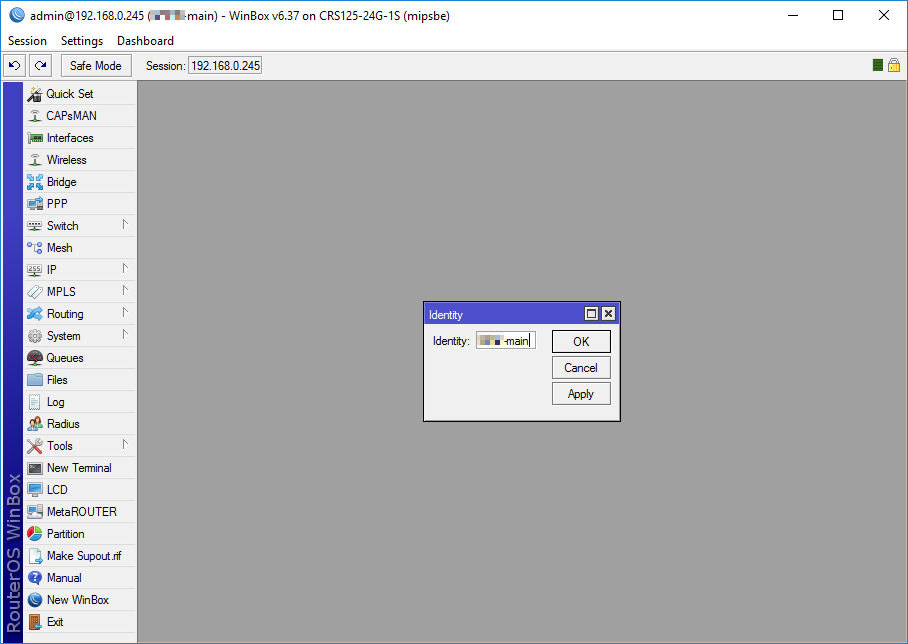